Sustainable Answer Acre is a farmer-led, collaborative research project on 8 acres of cropland in Mower County's Lansing Township. Mower SWCD is coordinating the project with Northern Country Coop, which owns and rents out the parcel as part of an 80-acre field.

Grant funding for the SAA research comes from the Minnesota Corn Growers and The Nature Conservancy. Other supporters include the University of Minnesota, Riverland Community College and local farmers, among others. 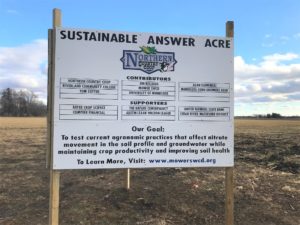 $50,000 in grants to aid farmer-led study on applying nitrogen to fields

AUSTIN, Minn. – Thursday, March 12, 2020 – Innovative, farmer-led research on the economic and environmental effects of applying nitrogen to cropland will continue this year thanks to $50,000 in new grants.

Mower Soil & Water Conservation District is coordinating the project with Northern Country Coop, a farmer-owned, local cooperative that has six of its 12 sites in Mower County and about 1,500 members, including nine who serve on its board of directors that supports the research.

“We’re trying to come up with solutions for our growers that are sustainable and economical,” said Jeff Irvin, regional manager for Northern Country, which is based in Stacyville, Iowa.

The SAA site includes 8 acres along Mower County Road 2 on an overall 80-acre parcel owned and rented out by Northern Country, which operates a grain elevator across the road in the Village of Lansing. Corn was grown on the 8 acres in 2019, and soybeans are planned for this year at the site, which drains to the Cedar River.

“Our hope is to gain a better understanding on farming practices that benefit both the environmental and the economics of a farm operation,” Lawler said.

Nitrogen is the nutrient that’s most often deficient for crop production in Minnesota, and its use can result in substantial economic return for farmers, according to the University of Minnesota Extension. When nitrogen inputs – such as fertilizer spraying or applying manure – to the soil are more than a crop needs, excessive amounts of nitrate might get in the ground or surface water.

By managing nitrogen effectively, growers can produce crops in a more profitable and environmentally friendly way.

For the second-straight year, Minnesota Corn Growers is providing a $30,000 grant through its Minnesota Corn Research & Promotion Council to the SAA project. The Growers’ $30,000 grant in 2019 helped launch the research, which included Mower SWCD drilling 60 wells (each 10 to 12 feet deep).

The Nature Conservancy, a global, environmental nonprofit that has an office in Minneapolis, is giving $20,000 for use over the next one to two years for the SAA research.

Area farmers led the launch of the SAA project, including Mower County farmers Tom Cotter and Jim Kellogg, who also is a board member for Mower SWCD and Northern Country. Alan Slowinski, who farms the SAA site, also is a contributor to the project.

Riverland Community College, another contributor, has used the SAA site as a “teaching laboratory” for the college’s agricultural sciences courses, including “Introduction to Soil Science.” Local high school ag classes also might use the site.

In the coming weeks, the SAA team led by Lawler will collect the first of seven samples from the site’s wells for nitrate testing. Summer soil sampling will include physical and biological testing.

SAA is one of three soil-health research projects planned for 2020 by Mower SWCD staff, with all three involving students and faculty from the University of Minnesota. Lawler is overseeing the research and soil sampling with all the soil-health projects.

One of those projects is the third and final year of research funded by a $98,000 grant from The Hormel Foundation to study the effects of cover crops on dozens of plots representing different types of Mower County farmland. Researchers are quantifying typical soil properties in ag before land-use changes to measure varied conditions.

The work has involved partnering with Riverland for use of its soils lab in Austin.

All these efforts are part of a soil-health initiative started 2015 by Mower SWCD when it hired Lawler, who has more than 30 years of applied soil science in the field. In a previous role, Lawler produced a soil survey of Mower County in the 1980s.

Interest in cover crops and other soil-health practices have increased in Minnesota but many local farmers want more data and science before changing practices.

One soil-health practice is cover cropping, which involves planting a second, unharvested crop in coordination with regular cash crops, such as corn and soybeans. Other soil-health practices include only tilling strips on a field before planting – a type of minimum tillage – and no tilling to reduce erosion.

For more information on the Sustainable Answer Acre research, go online to:  www.mowerswcd.org